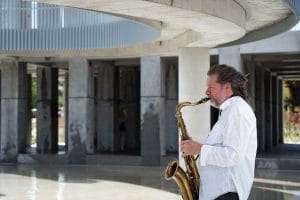 John has been an invited soloist on many albums over a period 33 years. In 2021, European label Galen, released the 2018 ABC Live at Wangaratta recording of the Emil Viklicky Trio, featuring Czech pianist Emil Viklicky, Miroslav Bukovsky on trumpet/flugelhorn and John Mackey on tenor saxophone.